Hello, and welcome to Aciman August! In case you missed my announcement I am using this month to read a whole load of books by Andre Aciman, who you may know as the author of Call Me By Your Name, and by whole load I mean a grand total of five.

Call Me by Your Name

This is the book that started it all. The book that I now have three copies of, because I just love it so much. I originally read this in February, and then re-read it in March so it feels like forever since I last read it. I’ve also seen the film, which I’ll probably re-watch this month also, and is a beautiful adaptation. Its very much that if you like one, you’ll like the other. The adaptation is not perfect, but it’s pretty damn close for a two hour version of this story. Call Me By Your Name is, at its heart a love story, which tracks the relationship of Elio and Oliver primarily over the course of one summer, and it’s gorgeous.

Out of Egypt is the autobiography of the author, Andre Aciman, who, obviously, is Egyptian, and I believe this tracks his family’s life in Egypt and their eventual move to the United States. I don’t know a lot about Egypt, but I believe there has been a lot of political unrest, and I’m expecting this book to discuss that to some extent. Since this is a bit longer than I was expecting, I’ll probably stretch this out over the course of the month, and hopefully small bits will help me to get all the way through to the end. As you can tell I’m a little but nervous about it, but I just need to get over this ridiculous fear of non-fic, how bad can it be, really?

This is the second non-fiction on my TBR, so that moth really is quite wild compared to my usual non-ficiton-less TBRs. Don’t get used to it, I’m sure normal programming will resume next month, or will it?. Alibis is a collection of essays, which is slightly more familiar to me, given that I have a BA degree in English Lit, though, if I’m honest, I tried to avoid reading essays if I could. These essays cover topics such as exile, and home, which might make it a good read after Out of Egypt, and I have some background info? There are fourteen easy in total, and less that 200 pages, so I figure they must be pretty short, and manageable.

This is the only book that I haven’t bought yet, but it’s on this list anyway, since it’s available via Amazon Kindle, so I can just download it anytime. This sounds more up my street, mainly because it’s fiction, but it also seems to deal with the topic of love, and relationships. Michael, meets Clara at a part one night, and for the next seven nights they meet at the cinema, culminating of New Year’s Eve. Part of me want too save this for Christmas, but at the same time, it’s Aciman August, so I really can’t decide what to do. Either way this looks like a lovely, and lyrical romance story. 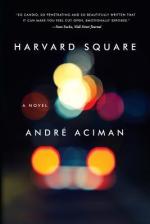 Out of all these book, and I know you shouldn’t compare an author’s books to each other but I’m going to do it anyway because this one sounds the most similar to Call Me By Your Name. Thing place in 1977, we follow a relationship that blossoms between a Harvard Jewish-Egyptian grad student, and an enigmatic Arab cab driver. It’s a novel about love, and about passion, that will also discuss what it means to be American, or what these characters think it means. Like Call Me By Your name this looks pretty short, which (at least I hope) means it’s going to be concise, which is a lot harder than you may think.

On a more Aciman-less note I may also be reading… City of Ghosts by V.E Schwab, because it’s V.E. Schwab, and of course I will be reading this on release day.

What about you: What are you reading this month? Are we reading any of the same books?