I feel like it’s been a while since I’ve read a Marvel graphic novel, and even longer since I’ve reviewed one, so, on a whim, I decided to pick up Civil War.

**This review is SPOILER FREE**

What do I need to read before this?

Technically nothing. The story itself stands on it’s own, however the more knowledge you have of Marvel character’s the better you will be. Name a Marvel character and they’re probably in this, but there are so many of them, they’re never properly introduced.

What do I need to know before this?

Like I said, technically nothing, but the more Marvel characters you can pick out of a line up, the more I think you’ll enjoy Civil War. That said, if your someone who’s seen an Avenger’s film, if you know who Iron Man and Captain America are, then you’ll probably be fine. 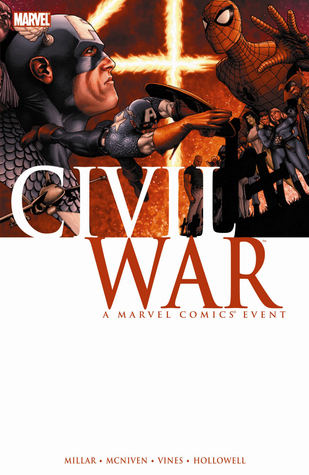 The elephant in the room…

Now, I am a huge MCU fan, and Captain America; Civil War is probably in my top three, or definitely in my top five, and I couldn’t not compare this to the film. You should know before going into the graphic novel that the film  is not a direct adaptation, and that’s fine. The concept of both of these versions is control over superheroes by a third party. And the core remains the small tin both versions, however, the film did have an extra level of emotional depth because of Bucky’s involvement. That’s not to say that there was no depth, because there were some great panels with Cap and Iron Man,  I will say that the next book in the series does have him on the cover, so potentially we will get that depth, but it wasn’t here.

Personally, I couldn’t help think of DC’s Injustice Year One, which I read earlier this year, and  also has a similar premise. Don’t get me wrong, they’re different enough that you can enjoy both, but I’m honest enough to admit that I preferred Injustice. Injustice just felt a lot more expansive than Civil War. Now, that’s not to say, I didn’t enjoy Civil War, and we’ll get onto the pros eventually, but if I had to pick one, it wouldn’t be this one. 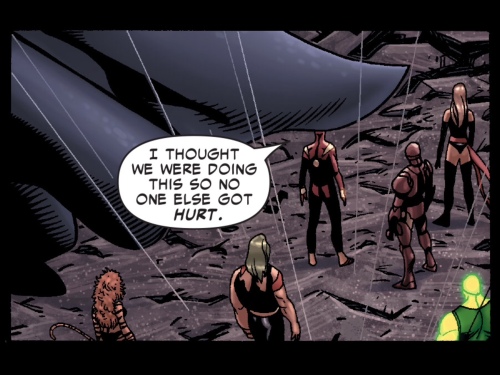 How many superheroes does it take to change a lightbulb?

I’ve already mentioned that there are a while load of characters in this book, from Avenger’s to Defenders, from X-Men to the Fantastic Four, they’re all here. A lot of them I didn’t know, but that didn’t really matter, because the story isn’t personal, at least not for them. It does make me ask wether we needed so many… The sheer amount of them just give off a fanboys-wet-dream sort of vibe. If that’s your thing, then you are set, but as someone who prefers character driven stories, it missed the mark for me.

The Star-Spangeld-Man and Iron Man

Without a doubt these are out protagonists, and these moments of depth that I previously mentioned do revolve around them. These were the best panes, the ones when it was just the two of them, fight or conversing, or sometimes both, because it was through these characters that we can sympathise with the whole situation. The genius thing about the central conflict in Civil War is that there’s no right side. Tony and Steve both a]have perfectly valid arguments for the decisions that they make, and their argument s both have vital flaws. Flaws which humanise and ground this whole “War” in realism. 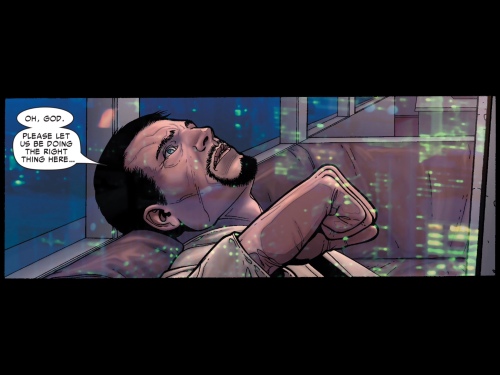 I can’t believe I almost forgot to mention the art! I guess its because the art was nice, not stunning, just nice. There were some awesome panels, nothing that would distract you from the narrative. I will say, and maybe this doesn’t count as the art, but Cap’s boots annoyed me because they were so costume-like. I know his backstory, and I get that this id chock full of characters in costume, but they’re just not good. I did, however, really like the look of Tony, out of the Iron Man suit, which we got to se multiple times, and this made his just a little more compelling than Steve, who I don’t remember being out of costume.

Where do I go from here?

I’m going to pick up Civil War; Captain America next (once I’ve cleared up my “currently reading” pile a little bit) and I’m hoping that there’s going to be more depth. I want to feel as though this is really tearing the characters apart, that they won’t be able to come back from it, and, most of all, I want some quality Bucky content.

What about you…. Have you read and/or seen Civil War and what did you think? Are you Team Cap or Team Iron Man and why? Who’s your favourite Marvel character?

Thanks for reading!
Victoria